One copy of the first edition is still available at the staalplaat shop in Berlin, also for postal orders. If this one has sold out, there are copies from the second edition. And if those sell out, I will need to produce a third edition.

Get more information on staaltape releases.

Go here if you want an exclusive copy, especially made for you. 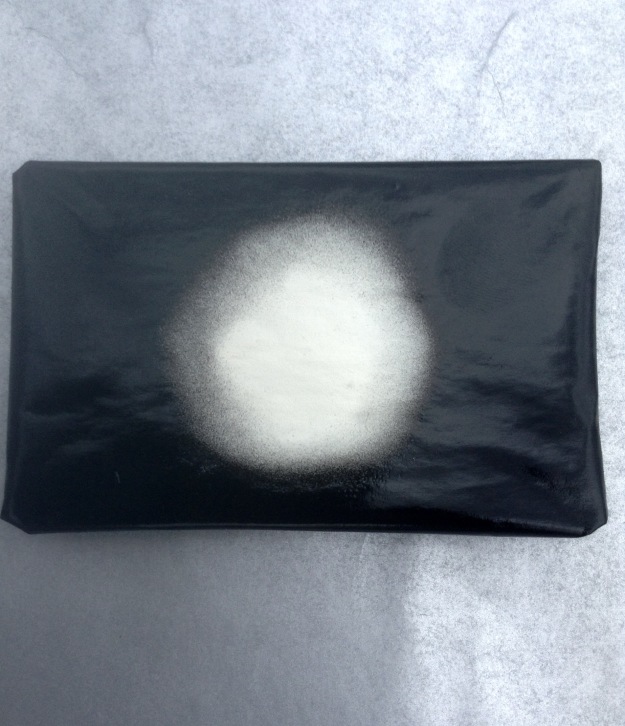 There is something about Angie Yeowell that gives this release an extra dimension. It can help in your listening experience.

In the last century she was a ballerina, a professional dancer with just enough weight on her bones to make it easy for her fellow dancers to lift her up and carry her around on the stage. We are talking about real professional Swanlake-Romeo-and-Juliet-ballet and about dance companies that put Royal at the beginning of their names.

She went to live and dance in Ostrava, a bleak Czech town not far from the Polish border and she lived in Prague, city of mystics and Kafka. She lived in the hedonist magic mushroom inspired city of Amsterdam and in impoverished Harlem in NYC before gentrification hit it hard.

And all that time she was a punk ballerina with blue or shiny black hair wandering around in a fast changing world that even didn’t know it was changing fast, only because everyone was clinging to the last remains of the 20th century.

She even made a radical change in her life, left the ballet world and went to live with buddhist beatniks in Colorado, probably close to a Glory Glory Sartori-yeah lifestyle and very close to the waves of enlightenment that washed upon earth’s shores. But also that life got absorbed once the century came to an end.

I know this is a very minimal glimpse in a now forlorn world where households- alas- were without internet. But it is a necessary annotation, because this album she made with her partner Robert Heim sounds like the come-back album of someone who had a kind of cult-fame in the last century and then disappeared completely from life and from everybody’s memory.

And now here she is, in Berlin. She made a tape, and there are fifty copies of it.

Put the tape in the record player. Listen.

The stage is dark. A dreamy melody wavers over the floor. One candle lights up. Then a spotlight. Angie dressed in black as if she has arrived after a train-ride that took twenty years. She sings. And from the first words you hear: „One candle in one room, its flicker, its shadow looms”  you feel that this goes deeper then life. Here’s somebody who comes to you with all the wisdom and strength you can gather by simply surviving, and surviving knowingly.

Yes, I know I should shut up. But let me point out one other thing first, before you decide to buy this tape.

Once the introduction stops and the lights go on you envision a futuristic city full of dark alleys and shining galaxies, high-tech skyscrapers and industrial wasteland. You encounter visitors from outer space and hard-boiled detectives. It is a world constructed by Angie and Robert, that at moments seems mechanical and forces you through the tunnels of time and than again is raw and blood driven as if you’re chasing a murderer who wore red shoes; a murderer that could be a lover too.

All the rest is for your imagination.

Comes with a booklet, designed and produced by Angie Yeowell and Robert Heim.

Available at Staalplaat or directly from Slow Slow Loris or from me (staaltape at staalplaat.com) for as little as € 8.50. 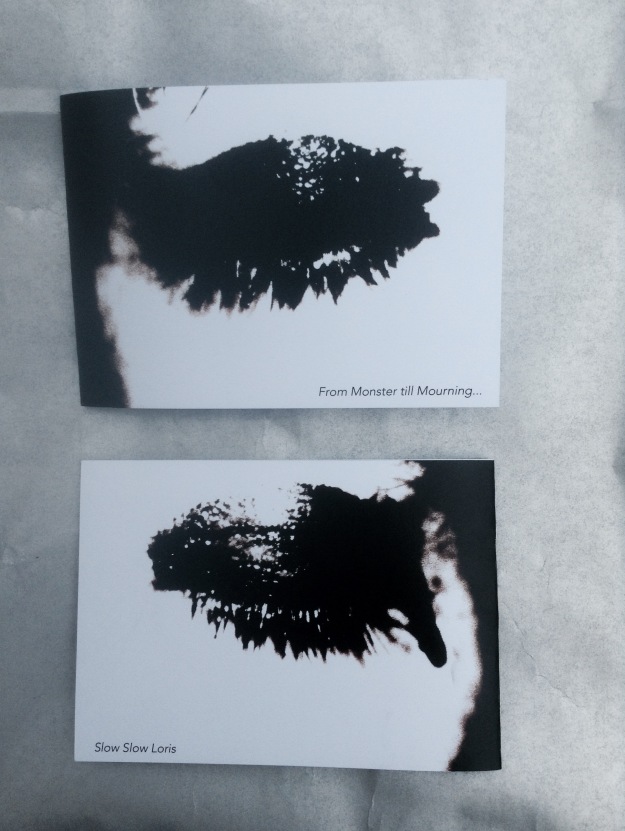 This is the White Striped Side 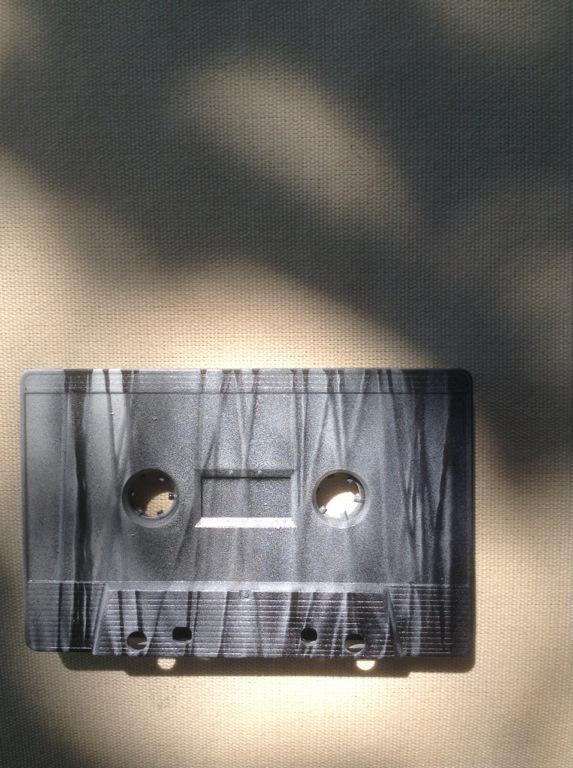 This is the Black Striped Side

These are the wraps of the tape.

This is the second collage for the inner pages of the booklet.

I don’t have a picture of the first one because it sold immediately.

This is the third collage.

This is the fourth collage

This is the package for the tape that got sold.

I know Jeff for a long time. If someone would achieve to write the Great American Novel it would produce invisible sounds, sounds Jeff is able to produce, don’t ask me how. It evokes the dream behind the horizon, the eternal song that hangs over a city, the silence at the other side of the window, the scratching of a pen. His music holds the quality of defining an era. Yes I am a fan.

On this cassette are nine tracks to convince you that you are a fan as well. It has a total running time of 40 minutes. The magnetic tape is of chrome quality. The dubbing was done by me with a Marantz PMD 430.

I am still working on the collages.

One by one the tapes get ready to ship.

You can get them for 12€ worldwide shipping included.

You can also think that these tapes are worth far more than I ask for; in that case name your price and be sure to get one.

The tape by Midori Hirano is the second in a series in which I asked an artist to produce a number of compositions for a total of thirty minutes. My two main demands were to spread the process over a couple of months, so that the passing of time would enter the final result, and to come up with ‘songs’ in a length between forty seconds and four minutes, approximately.

For this tape Midori made twenty-five pieces. You will hear recordings made in various places she visited in Europe and Japan. You will also hear an old piano, a piano she found, or encountered. It was very much out of tune… read more

The new audiozine, #2 is a vivid account of Diktat’s visit to the United States. Conversations, snippets of performances, travelogues, americana and guest appearances by Glenn Branca and David Thomas can be found on this C60 tape. Read more …

The cassette comes in a custom made cardboard package with  X-Ray pictures on the front and back side. The inlay is a high quality color print, plus a written piece of paper with the basic liner notes. Every copy has a different X-ray.

Price 8.00 Euro, available through staaltape at staalplaat.com or directly from the shop.

In how far this is an Audiozine, is of course to be judged by the listener. It was my intention to combine elements of essay-writing, travelogues, documentary and, in this case, docu-fiction.

If to some of you it still sounds like music, well, then let it sound like music!

We will use the proceedings of this ‘live inside/outside Berlin’ digital album release to cover the costs of the band’s stay in the US: car rental, gasoline, toll, parking tickets, (for me please no) hamburgers, beer, et cetera…

Needless to say that any amount will earn you a cheer; throw in €15 or more, and we’ll send you a copy of the Diktat overseas STAALTAPE release for *free*, as soon as it is available. (Also: in case of more than twenty tape-meriting donations, the cassette will NOT go on sale. It’ll be produced for your ears only …)

“When I heard the result of Groetjes uit Brussel, I sensed that it was very close to the concept of an AudioZine. What you hear on this tape is an ever-changing tale not only of four people who live in the same city, but also a collective work of art that documents a part of their lives . All four of them have managed to visualize a Brussels through their miniatures. If you follow the storyline, you will encounter a narrator, who is not always aware of the dreams and visions that surround him. Maybe he or she can hear them, intuit them, just as much as the listener to this tape can perceive what it is to live in Brussels at the beginning of the second decade of the twenty-first century.”

Carry yoiur favourite cassette with you in this smart Pocket Tape. Knitted from the magnetic tape of no more usable cassettes, this handy little chain armour like Pocket Tape finally dusts off the nostalgic patina. Order now for only 35.00 euro: staaltape at staalplaat dot com or wait for the next very special edition! 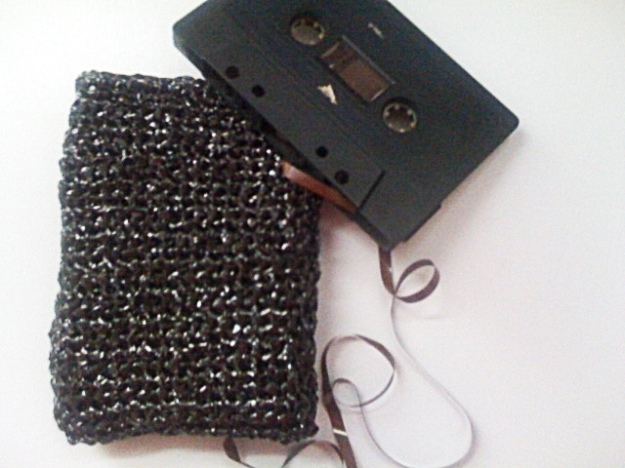 Here is some of the latest releases by Staaltape. Full description, pictures, track list, who is? and reviews are to be found on the staaltape site 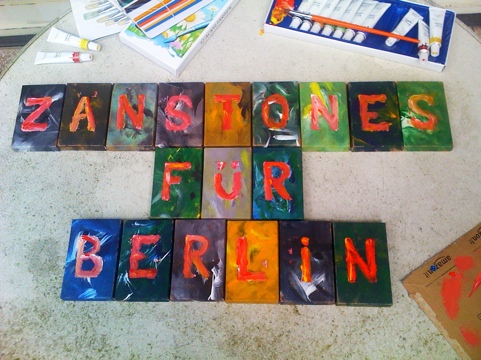 Listen to Radio On